I got a few sprigs of aloe from a friend and planted them this morning. I’m hoping they’ll do what comes naturally to aloe and give me a lush bed of the stuff. It’s the first of what I hope will be many medicinal plantings.

Right now I’m in the first week of a four-week course on soil. It’s given by a university in England through an organization called Futurelearn – it’s a MOOC, if you’re familiar with that term. It’s free, and so far it’s been very informative.

So far I’ve learned that soil is classified based on its particle size. Sand has the largest particles, then silt, then clay. It makes sense now that clay is so hard to work with as a soil, because the particles are so tiny and packed together. That’s what makes it so heavy.

Living in Florida, of course my soil is mostly sand. We were asked to post pictures of a cross-section of the soil where we live this week. Here’s mine:

Rich soil that is good for growing should have several layers. Mine only has a very thin top layer, an intermediate layer of roots, and then pure sand. The top layer is the only soil worth growing in, which is why I have to either amend my soil or build raised beds and buy soil for them – which is what I’ve been doing.

Next we’re going to test the texture of our own soil. I’m pretty sure what my results will show!

We’ve got to get ourselves back to the garden

Wow, have I neglected this blog, or what? I thought it had been a few months since I’d posted – it’s been two years. Argh!! Turns out a full-time career as a librarian and a part-time career as a writer aren’t compatible with being a successful full-time OR part-time gardener.

I did have a good carrot crop this year, and I have four loaves of carrot bread in the freezer now. But that was the only crop this year. Right now there’s nothing growing, as July is just too hot to grow anything here in FL. I want to plant potatoes in the fall. Right now I think one crop at a time is all I can manage.

I have eight years left to retirement, when I intend to be a full-time gardener and a part-time writer. I’ve been thinking about the best approach to the garden until then, and I’ve decided to concentrate on building my infrastructure – all the raised and in-ground beds I have planned, rain barrels for my gutter downspouts, and some new tools – while I can still afford the supplies. After retirement my income will be reduced, of course, but I’ll still be able to afford seeds!

Right now, I need to pull some weeds. 😄

To All Organic Gardeners: I Need Your Help!

My friend Jenna lives a few blocks from me, and has this bizarre thing on the leaves of one of her tomato plants. I have never seen anything like this. Can anyone identify these critters? She said they’re like thin black beans.

Every day when I get home from work, I putz around in the garden and examine all of my plants. Not only do I get the chance to pluck a lot of harmful caterpillars and worms from the leaves, but I get a chance to just sit and enjoy my blessings. Today, though, I’m stumped.

This is the front and back view of a Chadwick Cherry heirloom tomato plant leaf:

These black, shiny, bean-shaped things are actually embedded inside of the leaf. They look like seeds of some sort…maybe? Of all the years I’ve been a Zone 9 Florida organic gardener, I’ve never seen this. Please, please, please, gardeners, friends, bloggers, I beg you, help me. 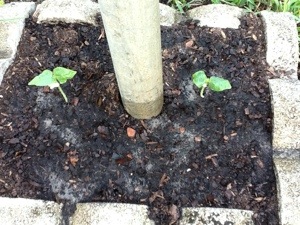 Here’s what the bean sprouts look like this morning. They’ve grown an inch in two days. Amazing.

Posted in Yard and garden

This didn’t take long….the white things that look a little like maggots in the dirt are bean sprouts. 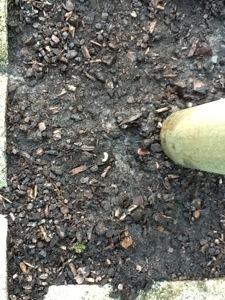 Posted in Food, Yard and garden

I just finished digging out two areas at the foot of my clothesline poles to plant beans. Last year I didn’t have enough support planned, and they got to be a tangled mess. This year I’m using my existing poles and line to keep them straightened out. They’ll have all kinds of room to spread out. 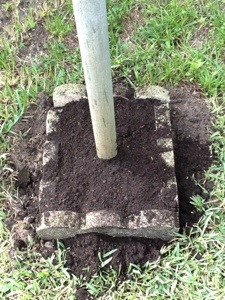 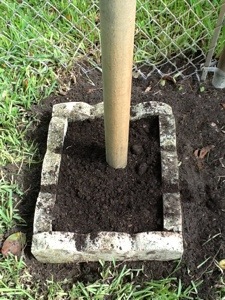 Posted in Yard and garden

Treading Softly
Create a free website or blog at WordPress.com.